Having not seen our friends, who live a few hours drive away, since the wedding back in January, we decided a little get together was in order. I scoured the NZ holiday house websites and we decided upon this little coastal gem: http://www.holidayhouses.co.nz/properties/2076.asp

A weekend was picked and anticipation ensued. The location of the bach was about half way between us and them so neither of us had to drive nausea inducing, windy coastal roads, yay! As well as L&P and jandals, NZ is kind of famous for narrow, coastal road ways.

We set off last Friday afternoon and after a quick coffee/gas stop and then a grocery stop we were there just after sun set. Joss had lit the fire and we quickly caught up on how everyone was, over a beer. Onemana, where the bach was, is quite tiny. Like, really really tiny, and has only a dairy and a small cafe so with rumbling tummies we jumped in the car and headed ten mins down the road to Whangamata for some fush and chups.

The weekend on the whole was relaxing with fairly good weather. The sun was shining both days but there was a fierce wind and finding a sheltered spot was a bit difficult. It died down on Saturday afternoon just as we had grabbed more beer, ready for the Saturday night, and arrived at the local skate park for the boys to have a play around.

I find it so good for the soul to catch up with old friends, chat about all of life’s little goings ons, relax and unwind while imbibing tasty beers and eating a bit too much food. We’re all in our late twenties/early thirties so having too much to drink and going to bed at 3am wasn’t so much on the agenda. Instead we played board games like Pictionary and Balderdash, and laughed a lot. I love the wholesome, shameless fun that comes with being a bit older and not so consumed with getting shit-faced or laid. Though, those things are still fun 😉

One of the things I looked forward to this trip so much for was because I volunteered to cook for everyone. Another way for us to be all brought together and add to the happy memories of the weekend – plus it’s a bit self indulgent for me to be able to do what I love, for the people I love.

The following photos are of the two breakfasts I cooked (I also cooked on Saturday night which was vegetarian nachos and cauliflower mac and cheese – recipe here – but there are no photos).

The vegetarian version of my infamous breakfast stack (it was meant to have hash browns as well, but they were in the freezer – out of sight, out of mind. A bit sad, but not a total loss by any stretch) 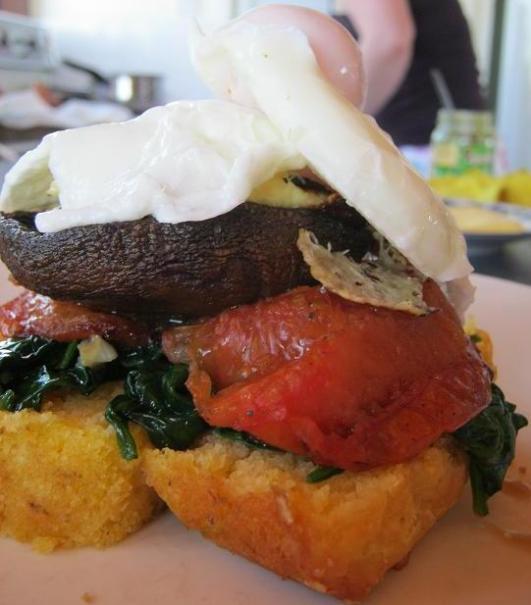 In case you wish to try it at home: corn bread, sauteed spinach with garlic and olive oil, oven roasted mushrooms with herbs, oven roasted tomatoes with salt, pepper and olive oil, haloumi cheese and poached egg. I sometimes add a relish or pesto on the side. This one had pesto which I usually would spread on the corn bread but the kids eating it this time wanted to have the “full corn bread experience” as it was their first time.

This photo is of the non-vege version – just add bacon: 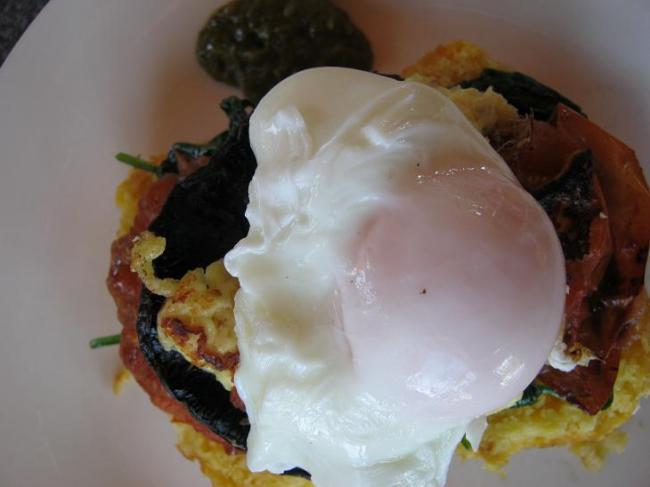 On Sunday, as Scott and I had to leave a bit earlier than a casual brunch allows, I prepared a smoothie to start (no photo) containing banana, sweetened almond milk, soaked walnuts and vanilla – blended. I wanted to strain it to get the larger chunks of walnut that wouldn’t blend (used a stick blender, probably would’ve been better blended with an actual blender) but there wasn’t a strainer. The nuttiness was appreciated anyhow. To accompany (but not compliment) the smoothie, I had already baked a loaf of what I call magic bread AKA The Life Changing Loaf of Bread thanks to the amazing Sarah Britton of “My New Roots” fame. I topped toasted sliced of this bread with cream cheese, capers, smoked salmon and a bit of lemon zest and a small squeeze of lemon juice. Amaze balls!

Suffice to say, there were groans of delight after a filling breakfast, on both days which made me quite a happy lass.

I spent yesterday afternoon trying to keep the goodness of the weekend going with a book in the sun. I even had to slip, slop, slap as the sun was feeling harsh and I have pasty ass skin. Later met my sister for a couple of drinks at a local pub where we hoped to win the “find the joker jackpot” but were unsuccessful. A trip via the supermarket on the way home to grab the weeks eats and home again to whip up some spaghetti alla puttanesca and a toasted caramelised onion and brie sandwich.

Should probably go to the gym after work today… 🙂 I hope you had a lovely weekend, whatever you did.

This blog is supposed to be a forum. So, I want to put it out there to all the ladies in the world (or just the 3 I know read this): what do you do for your husband?

I don’t mean the domestic/household type things like laundry and vacuuming and cooking and sex. Is that last one a chore? It shouldn’t be…it just slipped in there.

I mean, we secretly wish that they would do wonderful, creative, and over the top things for us spontaneously. But do we do this for them?

I ask because this weekend, tonight actually, I am surprising Mr Jenna (Scott) by taking him to a 4.5 star hotel I booked a couple of weeks ago. I’m packing a bag with a change of clothes incl. his pj’s and some board shorts for quality time in the spa pool at the hotel. I’m picking up some beer for him and treats for watching a movie in the KING SIZE BED and splashing out on room service for dinner. And I’m leaving him to it. Haha! No… I will be there too.

He is none the wiser (and doesn’t read this blog). The reason I’m doing it is to say congratulations on three months of not smoking and thank you for coming to NZ and leaving everything you knew as well as working a shitty job for the first three months after you got here. He went cold turkey on the smoking the day he arrived in the country and was a car groomer up until two weeks ago which he HATED. Back story: he’s Canadian. We met in Canada while I was travelling, we fell in love and I couldn’t get an extension on my visa so we got married and then a week later I had to leave. Five months apart before he could get to NZ and was almost a pack a day smoker before arriving.

As well as the night in the hotel, the soak in the spa and the room servicey goodness, I have a lunch booked at a little tavern in wine country near where we live for the day after – also a surprise.

In a way I am reinforcing his will to give up smoking by rewarding him for the massive feat, but at the same time, I really love to treat my husband and show my appreciation that he is in my life. And, for me, getting excited about planning surprises for Scott and having someone in my life to do this for makes me really happy.

But enough about me…I just wanted to put it out there – to ask what you, the wives/girlfriends/life partners are doing for your male significant other? Tell me, I’m ever so curious.

an underground restaurant nestled in a vancouver home

dandelions at my doorstep

Cooking with a Wallflower
Goan Recipes

Learn about Goan and Indian Recipes

Tales of a Kitchen

The Laines Pub lets you in on all our secrets!

the art of wonderment